For the Silly Season I've set myself the challenge of visiting a different art exhibition on every day of the month and blogging about it.

Figurative art is not smiled on in much of the moslem world so it isn’t a surprise to find that this small display of work from the British Museum’s Department of Prints and Drawings focuses on Arab artists strongly influenced by European modernism. The Lebanese sculptor Michel Basbous (1921-81), very well known in his own country as a torchbearer for modernist sculpture, was in Paris at the movement’s height, and close to the Belorussian Osip Zadkine. The drawings by him of bodies in blocky charcoal are typical of a sculptor.  They are not distinctively Arabic as the comparative example by Zadkine alongside shows. 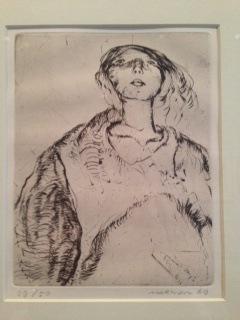 The same can be said of the suite of etchings by the Syrian Marwan (b. 1934) who studied in Berlin with George Baselitz. I suspect these are self-portraits – at least all are of the same subject, and thickly painted oils by him of the same person can be seen on the internet (those I have seen are simply entitled Head).  Again a comparative example by Baselitz is provided.

The Lebanese Shafic Abboud (1928-2004) and the Iraqi Rafa al Nasiri (1940-2013) are closer to their roots, especially in the way they celebrate the beauty of Arabic script. They do so in their oil paintings, and in the artists’ books seen here by them both. Abboud was also inflected with French modernism, after long residence in France, and is additonally represented by his illustrations for a children’s book Le Souris – charming enough but of specialized interest compared with his  powerful abstract oils. 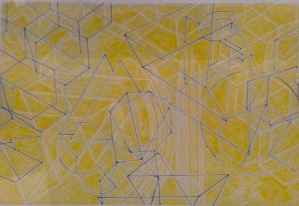 Another Lebanese Nabil Nahas (b 1949) is a famous figure on his country’s art scene, though he divides his time between there and the U.S. His art is both abstract and representative, since it deals with fractals – the mathematical patterns of nature. The two works here are preparatory sketches for the big murals he did for Yale University Chemistry Department.

The work I enjoyed most in this show are the student work, done at St Martin’s School of Art in London in the 1980s, by Safeya Binzagr. Not the rather conventional picture of a noble arab with a falcon on his wrist, but the more personal stuff. One is The Blind Schoolteacher a highly accomplished and amusing work for a young person, which I imagine is a reminiscence of his childhood.

The small print, based on a sketch from Binzagr’s student notebook of heads in a crowd seen from above, is a slight enough piece but I found it touching. I imagined the young Binzagr looking down from the window on the bustling scene of a London market, trying to capture the essence of the crowd. The effect is not arabic at all, but just a little Hogarthian.

Survivals from the Byzantine Empire

The career of painter print-maker and poet William…